This post is a compilation of two articles I have written for the Enid News & Eagle about intergenerational early childhood education, where preschoolers have class in and are taught with the help of residents of a nursing home.

This model has tremendous benefits for both age groups, and has drawn repeated international attention. But what’s most striking is the interaction of the young and old. It will reaffirm your faith in humanity if you ever get to witness it. 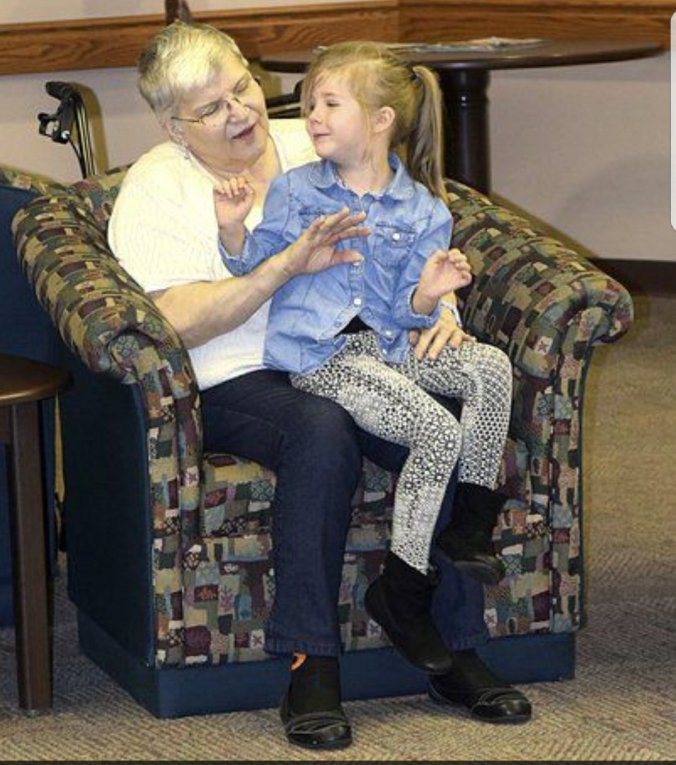 ENID, Okla. — When parents look for a pre-kindergarten program for their children there a lot of resources and programs that rise to the top of the wish list. But, in most cases, kids don’t have access at their pre-K program to care and attention from a room full of grandmas and grandpas.

Parents select whether to enroll their children in the intergenerational program or the more traditional classroom program.

For those who attend the intergenerational program, there are learning rewards that go beyond the traditional curriculum, said EPS early childhood education director Chris Smith.

Smith visited with the News & Eagle in an activity room dedicated to Alzheimer’s patients at The Commons. Students were busy working alongside residents to cut out and decorate colorful rain clouds and rainbows.

Working together with the elderly residents teaches emotional skills to the children, Smith said.

“It adds empathy to the children’s learning,” she said, “and it teaches them to have compassion.”

She said working with nursing home residents teaches children patience and sharing skills in ways they might not learn in a traditional classroom.

“They learn to share in here even better than working with other children,” she said.

But, the lessons don’t all flow from the elderly to the children.

She said the children provide the residents with a sense of connection to the community, and a purpose in teaching skills and values to a younger generation. That benefit is especially strong when the children visit the rooms of nursing home residents who aren’t able to come out and visit in common areas.

“When they do visitation they will go in and share what they’ve learned for the day, whether it’s their ABC’s, a nursery rhyme or their colors,” Smith said. “A lot of the residents have a hard time remembering things from their recent past. But, they remember those things — and all of a sudden, they have a sense of being worthwhile and valuable because they’re helping a child learn.”

The children also are the beneficiaries of some intangibles that can’t be provided in most classrooms.

“There isn’t a child in the world that doesn’t need more time and love,” Smith said. “Most of these residents have nothing but time and a lot of love to give, and they love sharing that with the kids.”

Lisa Scott, administrator at The Commons, said the intergenerational classes also are a benefit to the residents.

“The residents love it,” Scott said. “They look forward to the interaction with the children. Getting to participate in the learning with the children makes them feel like they’re still a valued part of the community.”

And, she said, the residents are an invaluable resource to children who might not get much interaction with an older generation.

“If a child doesn’t have a grandparent living close by, the residents can really become their surrogate grandmother or grandfather, and it’s very beneficial for both of them,” Scott said.

That kind of mutually beneficial relationship is what drew Lorraine George, an early childhood educator and teacher trainer, from her home in Torbay, in southwest England.

She said she first heard of the intergenerational learning concept in early childhood education from a school in Seattle, Wash., and then began researching other schools she might be able to observe so she could implement the program in England.

“We don’t really have any intergenerational co-located settings like this in England,” George said. “There is one in London, but it just started several months ago.”

Last year, she submitted a grant application to the Winston Churchill Memorial Foundation, which funds 100 grants each year for Britons to study abroad and bring back innovative ideas to implement at home.

George was one of 100 grantees selected from among more than 1,300 applicants.

She visited Enid on Wednesday as part of a tour that includes schools in Seattle, Oklahoma City, Clinton, Jenks and several stops in Kansas.

George said intergenerational early childhood education may be a new concept in Britain, but it is one that begs to implemented.

“When you watch the interactions they have, the two generations bring so much to each other,” George said, “and when you see how beneficial it is, you have to ask yourself ‘Why aren’t we doing this.’

“It’s just magical to watch them together,” George said. “There’s so much benefit in it to bringing the two generations together.”

Upon her return to England George plans to write and publish a research paper of her findings, advocating for broader use of the intergenerational learning model in Britain.

George’s visit was not the first time the EPS program has drawn attention from visiting educators. Teachers and researchers from as far away as Australia and South Africa have visited to observe the class, and representatives from the Chickasaw Nation and Oklahoma County visited The Commons in May in hopes of learning aspects of the program they could implement at home.

Michelle Key, director of childhood development for the Chickasaw Nation, said she was touring the intergenerational pre-kindergarten program “out of interest in the interactions between the elders and the children.”

Key said she was overcome with emotion while observing the interaction of the children and nursing home residents.

She said she was drawn to the program because the “soft skills” being taught in the intergenerational program are invaluable.

“What I’ve seen in the short time I’ve been here is that we’re developing the social and emotional skills of these children,” Dykstra said. “They’re learning to care for others, and really those are the kinds of citizens we need. They’re learning right here to be good citizens in the community and to support it.”

Dykstra said teaching children the skills of empathy and compassion is essential to building a better future for society.

“Making sure … that our culture reflects how important both our children and our elderly are is important for the future of our communities.”