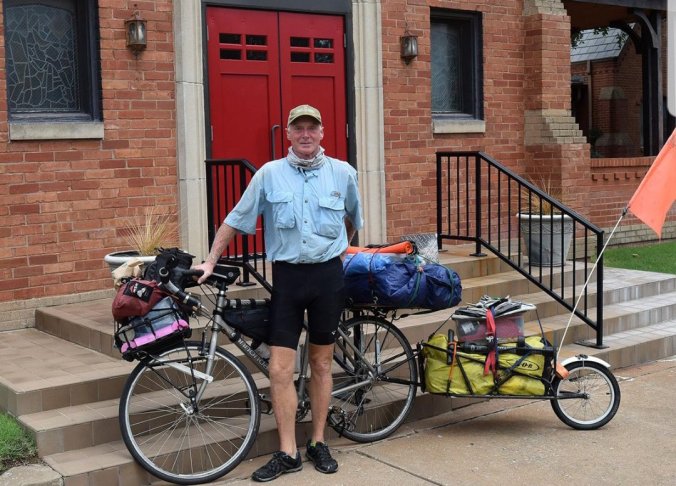 ENID, Okla. — A Catholic monk made a stop in Enid Sunday on a cross-country cycling tour to promote Christian unity and collect prayers for a display in Washington, D.C.

Brother Lawrence Chase, who describes himself as “the bicycling friar,” began the American Faith Unity cycling tour last summer in Virginia and hopes to complete his ride in California. He’s stopping along the way at churches of various Christian denominations to promote and solicit prayers for unity in the faith.

While he is a practicing Catholic friar, Chase is inspired by a variety of faith traditions. Raised in the Episcopal Church, he said he drew strong influences from Jewish and Jesuit Catholic neighbors as a youth before converting to Catholicism in his 20s, and today he draws inspiration from Buddhist meditation practice.

Originally from Fairfax County, Va., Chase said he’s “always been very close to God,” but ministry was not his first vocation.

After graduating from high school in 1974, he enlisted in the Navy and served five years as an aircraft mechanic. He then studied at Old Dominion University in Norfolk, Va., and went on to run a successful business as a contractor in residential and commercial construction.

It wasn’t until his 60s that he pursued a longtime desire for a more structured pursuit of God.

“In the back of my mind, I always knew I wanted to go to a monastery,” Chase said. He fulfilled that dream by moving into Monastery of Christ in the Desert, a remote Benedictine monastery in Abiquiú, N.M.

After several months, Chase came out of the monastery to settle his mother’s estate, after which he moved back to Virginia.

While the cloistered nature of monastery life was not a good fit for Chase, he said he continued to feel called to serve in society as a friar, or monk living outside a monastery.

That call was heightened after a shooting incident last June in Alexandria, Va., when a man opened fire on a practice session for the annual Congressional Baseball Game for Charity, wounding U.S. House Majority Whip Steve Scalise, R-La., and three other people before being shot and killed by police.

Chase said the shooting was an indication of the “animosity, anxiety and hostility” that has come to characterize American political discourse.

At an Episcopal church service the following Sunday, as the Scripture for the day was being read, Chase said he felt called to promote Christian unity as a counter to the growing divide in American society.

“I was struck by the Holy Spirit, by Providence, God — however you want to put it,” Chase said, “and I was told ‘Get on your bike and go around America and talk to all different denominations.’”

At 62 years old, with no financial backing or logistical support, Chase said the prospect of pulling out his old bike and heading cross-country posed a challenge. But, he said, it also gave him the opportunity to “live as Jesus told the disciples to live,” to “just go, to not worry about things, and know that it will always work out.”

Chase started pedaling west last August in Virginia, crossed the Appalachian Mountains, continued through Kentucky and Illinois, then back south through Tennessee, Mississippi, Louisiana, Texas, and into Oklahoma on Aug. 11. He stopped counting the distance he’s pedaled at 4,000 miles.

He camps or sleeps where he can along the way, relying on the charity of others to provide food, bike repairs and supplies. Every time he’s run short on food or needed help, Chase said someone always has shown up to provide. He attributes that providential supply to “the hand of God.”

In keeping with the ecumenical intent of his journey, Chase has been visiting Christian churches of various denominations, including Methodist, Baptist, Catholic, Episcopal, Presbyterian and Lutheran congregations.

“This is a spiritual exercise,” Chase said of his journey, “and it’s a way for us as Christians to not classify ourselves as Baptists or Catholics, or whatever, but for us to just work together as Christians.”

Chase doesn’t solicit funds or proselytize on his stops. Instead, he asks for prayers for peace and unity “or whatever else people want to pray for.”

Chase is collecting prayers, written or painted on pieces of cloth roughly the size of a piece of notebook paper, from each stop on his journey. He’s asking churches across the country to send the “prayer flags” to Pohick Episcopal Church, once the parish of George Washington, in Lorton, Va.

Once the prayers are collected, Chase plans to display them on a framework to make a temporary cathedral of prayer flags on the National Mall in Washington, D.C., hopefully for five days sometime between Ash Wednesday and Easter 2019.

Chase said he hopes the collected prayers will “create an atmosphere of silence, respect, reverence, serenity and sacredness.”

While the project has a Christian emphasis, anyone of any faith or of no faith is welcome to submit a prayer for inclusion in the project, Chase said.

Chase expects to be in Wichita, Kan. on Wednesday, then pedal west to Colorado. From there, he plans to work his way north to Montana, then west to the Pacific coast and south to the conclusion of his journey, which will be at the Franciscan Mission in San Luis Obispo in California.

Winning out over hate

Despite the rancor of American politics, Chase said his trip so far has increased his confidence that love, “that great power that knows no bounds,” will win out over hate.

Chase isn’t sure when his trip will be complete, or what he’ll do afterwards. He said God will reveal the next plan when it’s time.

“All my life has been one step after another to the next thing God wants me to do,” Chase said, “and right now it’s going around America talking to people about this … and relating God and theology to people in down-to-earth terms.”

Updates on Chase’s journey and the prayer flag project are available at The Bicycling Friar page on Facebook.

One thought on “Pedaling for peace and unity”