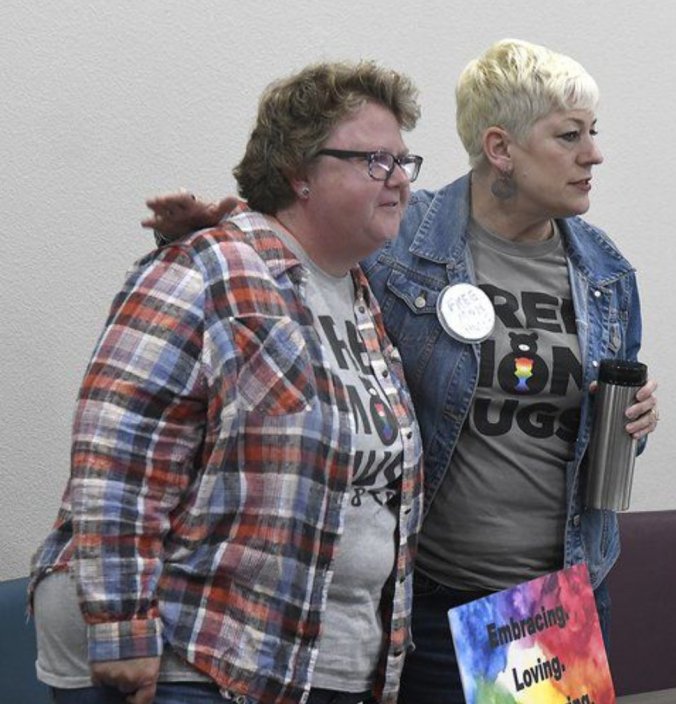 Katrina Kalb describes herself as being on a journey back into her Christian faith — a journey she almost didn’t live to take.

Today, Kalb, in her early 40s, is interim president of Free Mom Hugs, a nonprofit that advocates for unconditional love of and equality for LGBTQ people. But, in her 20s, Kalb was an evangelist and minister in a conservative Christian church, caught in a conflict between her theology and her sexual identity — a struggle that led to depression and attempted suicide.

From early in her adolescence, Kalb said she knew she “was different” because she wasn’t attracted to males. But, she found a welcoming social support network when she joined a Baptist Student Union in college.

Kalb immersed herself in evangelism, and after college became a chaplain at a private Christian school and served as an evangelist in an independent church that boasted a non-legalistic theology.

But, as she came to understand her LGBTQ sexual identity, Kalb said she began to sink into an inner conflict between her faith and her identity.

She fought to “pray away the gay,” but when her fervent prayers didn’t change her sexual orientation, Kalb voluntarily underwent conversion therapy — a practice that uses psychology or spiritual counseling in an attempt to change sexual orientation.

“As a 25-year-old, I wanted to be accepted and pleasing to God,” Kalb said, “and I put myself in conversion therapy.”

When that also failed to change her sexuality, Kalb said she suffered severe depression.

“I didn’t realize all the internal damage I was doing and the internal homophobia I was putting on myself,” Kalb said, “and not realizing it wasn’t working.”

Unable to reconcile her sexual identity with the biblical interpretation of sexuality she’d been taught, Kalb didn’t see a way forward, as an LGBTQ person or as a member of the church.

Kalb was living a risk for suicide that disproportionately affects the LGBTQ community, especially among youth, who are three times as likely to attempt suicide as their peers, according to the American Medical Association.

She twice attempted suicide, “out of my frustration that I wanted to be in ministry, but I couldn’t if they found out who I really was.”

Her church did find out. She was outed publicly, before she was ready to come out, and was fired from her job.

Today, Kalb doesn’t bear bitterness toward that church. In a way, she feels responsible for facilitating the attitude that LGBTQ Christians need to be “healed” — an attitude that drove her to attempted suicide.

“I am just as responsible as a gay Christian,” Kalb said, “because of telling people I was ‘healed,’ because of laying hands on other people and praying over them to be ‘healed’ too.”

She’s found her way back into faith and the church, but she said “it took quite a while,” and “was a long, dark journey.”

Kalb said well-meaning Christians can cause great harm to LGBTQ Christians in what they believe to be a loving approach.

“I want to educate people that so much that happens in church, the simple act of ‘praying away the gay’ … praying over someone and saying ‘spirit of perversion, come out of this person’ — that is so shaming,” Kalb said.

But, some Christian pastors and counselors see it as more damaging to not try change LGBTQ people’s orientation.

“What is the motivation behind anyone who would stop counseling or therapy for sexually confused youth?” asked Stephen Black, executive director First Stone Ministries of Oklahoma City. “They want those teenagers to embrace the LGBTQ identity and be welcomed into that environment, that we call chaos. That’s the agenda.”

As a young man, Black lived eight years as a homosexual. Now, he considers those who identify as LGBTQ as “sexually confused,” and their sexuality “outside God’s plan.”

First Stone provides “pastoral care” and counseling to “help people overcome all forms of sexual and relational brokenness,” Black said. He and his staff are not licensed counselors, and Black said their methods are “not reparative therapy, but we have had training in some of the same techniques.”

Black said First Stone only works with people who have expressed a desire to change their orientation, or to quit other habits, such as pornography. His team only works with minors after meeting with them and their parents, and will only continue meeting as long as the minor consents.

Attempts to curtail or ban reparative therapy are part of a larger agenda, Black said, to silence traditional Christian views of sexuality.

“There is a politically motivated body of people who want to eliminate any form of what they say is discrimination, who say that the church or any organization that is Christian must be silenced,” Black said. “That is the endgame.”

State Rep. Jason Dunnington, D-Oklahoma City, said he had no desire to curtail religious liberty or silence Christians when he sponsored House Bill 2456, which would bar mental health providers in Oklahoma from practicing conversion therapy on minors.

“I’m not sure that’s something we, as Oklahomans, want to get into — the practice of limiting religious freedom,” Dunnington said, “but I do think it’s very appropriate for us to take steps when it comes to licensed psychologists and therapists in Oklahoma.”

The American Psychiatric Association (APA) ceased to classify homosexuality as a mental disorder in 1973, and in 1998 came out staunchly against reparative or conversion therapy.

APA went further in a 2013 statement that the organization “does not believe that same-sex orientation should or needs to be changed, and efforts to do so represent a significant risk of harm by subjecting individuals to forms of treatment which have not been scientifically validated and by undermining self-esteem when sexual orientation fails to change.”

Conversion therapy currently is banned in 14 states and the District of Columbia, and the APA continues to call for broadening bans on the practice.

Dunnington said the point of his bill was not to prevent families from seeking counseling for issues surrounding sexual identity, “which could be very appropriate.”

He said his bill would only have affected counseling “if that turned into a process where you were using the therapeutic process to turn someone into something they’re not,” and was intended to protect children from the potentially damaging effects of conversion therapy.

HB 2456 didn’t make it out of committee this session, but Dunnington hopes to submit it for an interim study.

“I would hope that parents were educated enough in issues to understand the difference between taking their child to a licensed therapist and a group that calls itself a ministry that performs a harmful process on children,” Dunnington said, “but that’s up to them.”

Wade Burleson, lead pastor at Emanuel Enid, cautioned against any effort to coerce someone into changing their sexual orientation.

“I would never try to force anyone to change,” Burleson said. “I think change is something from within and internal.

“If someone comes to me and says, ‘I don’t want to change, I identify as a homosexual and God made me this way,’ I would be quiet. They’re not asking me anything, and I don’t think it’s my position to argue. But, if they were going to ask me what I think, I would tell them.”

Burleson, like most who identify as holding a traditional view of sexuality, sees LGBTQ lifestyles as sinful.

He said he wants Emmanuel and its congregants to be welcoming and gracious to LGBTQ people who want to worship or receive pastoral services at the church, and he would — and does — socialize with and pastor to members of the LGBTQ community.

Burleson said he believes in equal LGBTQ rights in civil society, and is not opposed to same-sex civil unions. But, he said he draws the line at LGBTQ members holding leadership positions in the church, or in attempts to “normalize” LGBTQ sexuality within the context of Christian theology.

But, other Christian traditions don’t see a struggle between faith and sexual orientation.

“It is not enough to welcome LGBTQ persons to our churches,” said the Rev. Kathy McCallie, director of the doctor of ministry program at Phillips Theological Seminary and pastor at Enid Faith Ways United Church of Christ.

McCallie said preoccupations over sexuality continue to split families and churches, and cause harm to LGBTQ people, especially youth.

“Jesus never said anything that was recorded about same-sex acts,” McCallie said. “Yet, people who have never read the Bible are sometimes traumatized by ideas that they are going to hell for being gay.”

The way God made him

Sara Cunningham, founder of Free Mom Hugs, struggled with that conflict between faith and sexuality when her son Parker came out as gay.

“It was a journey that took us from the church to the pride parade without losing my faith,” she said during a presentation in Enid Saturday. 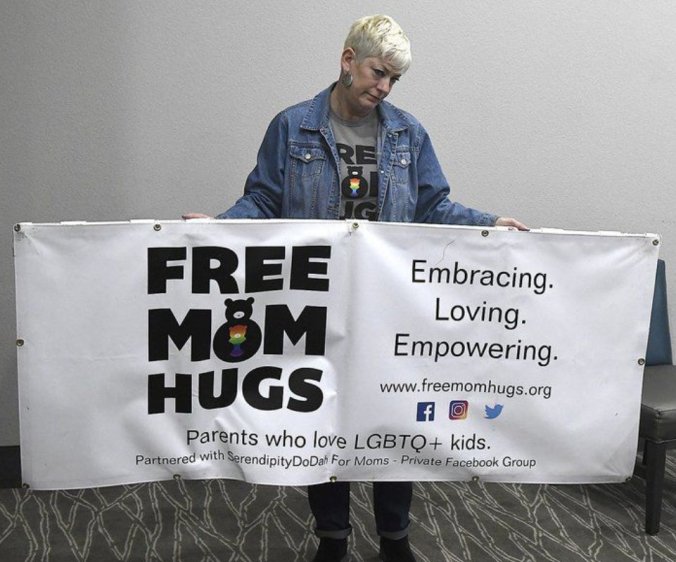 Cunningham said church was a central part of her family life. “We were there every time the doors were open, and we raised our boys there,” she said. “I loved the church, I loved the body of faith and I loved the Gospel.”

When Parker came out, Cunningham said she “didn’t take the news very well.”

“I said some things and I thought some things that I regret to this day,” she said. “I thought, ‘God’s not going to allow my son to be gay — we raised our sons in the church and to know the Gospel.’

“I thought, ‘If my son is going to hell for being gay, I have to stand up and fight for him like my hair is on fire,’” Cunningham said. “I clung to my faith, but it was killing me.”

Cunningham said she started to accept Parker when he made an emotional appeal to her.

She started seeking out other moms of LGBTQ youth, and found a network of moms like her — women of faith — who also loved and accepted their kids, and their sexual identities.

“I had to hear from someone who shared my faith,” Cunningham said, “and who said ‘It’s OK to search this out.’”

Looking back, Cunningham said in those early days, when she felt torn between conservative Christian theology and the love of her son, it was only Parker’s age that kept him out of conversion therapy.

“We were finding out the dangers of conversion therapy,” Cunningham said, “but if I’m being completely honest, Parker was too young to go through the program, or else he may have gone through that.”

Today, she wouldn’t have her son any other way than how he is — the way, as she sees it, God made him.

Ashley Gibson, of Tulsa, one of the attendees at Cunningham’s presentation Saturday, said that kind of acceptance is crucial for the well-being of LGBTQ people.

“Everyone has skin in this game,” Gibson said, “because whether you know it or not, there is someone around you who is waiting to hear if you’re a safe person to be around.”

Cunningham’s journey from conflicted Christian to “accidental activist” hasn’t dampened her faith. Rather, she said, it’s deepened her faith in God.

“I experience God to a much greater degree than I thought was possible,” Cunningham said. “I still love God, I love the Gospel, I love the fellowship of believers and I love humanity — all of humanity, in all its expressions. It’s a beautiful place to be.”